Against a background of growing hunger, environmental damage and climate change, Haiti rises to its challenges.

Last February, four members of the Haiti Advocacy Working Group traveled to Haiti at the invitation of the then Minister of Environment, Simon Dieseul Desras.  In  preceding weeks, HAWG members have written blogs, offered reflections and video diaries of their trip.  Now you can watch the video of their trip. 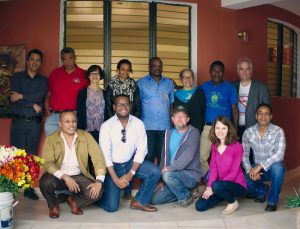 The video is being released against a background of heightened concern about food insecurity in Haiti.   Haiti is one of the most climate vulnerable countries in the world.  It also faces severe environmental challenges.   Sustained, long term support and participatory support to the country’s local institutions remains critical if Haiti is to recover from these interlocking problems.  Now more than even before, governmental institutions, farmers associations and civil society groups and impoverished Haitians need the ongoing engagement, technical support and solidarity of the domestic and international stakeholders in order to prepare for climate change long term, as well as face the critical challenge of nation-wide hunger.

One month away from the start of the 2017 hurricane season, thousands of Haitians have still not recovered from Hurricane Matthew of October 2016.  The devastation caused by Hurricane Matthew comes after three years of sustained drought caused by El Niňo, which had already significantly depleted the agricultural produce of Haiti’s farmers, especially in the northern region.  As early as February 2016, the World Food Program had already declared that 3.6 million people were food insecure.

Here is a snapshot of their findings:

We are all stakeholders in Haiti’s future and urgently want what is best for all Haitians.   It is unacceptable that thousands now go hungry every day.  Let’s all think creatively about the long term strategies that are needed in-country to decrease hunger and address Haiti’s long term food security.