The analysis shows that following an increase in pledges immediately following the 2010 earthquake, the Inter-American Development Bank has pledged consistent amounts of money to Haiti since 2011. Roughly a quarter of those funds since 2011 have been pledged to the Caracol Industrial Park, a public-private partnership also backed by the Clinton Global Initiative.

Critics of the Caracol project point out that as of February it had only produced 7,076 out of the 65,000 jobs backers hoped for by the end of 2020. A 2013 report by the civil society organization Gender Action also found that in the first year of operations female park employees had not been empowered by their jobs at Caracol.

Defenders of Caracol argue that the project has benefited the surrounding region, the majority of the park’s employees are women and that it is still too soon to judge the project. 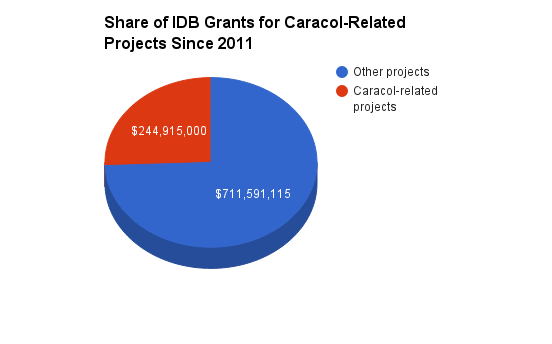 Most Caracol employees make Haiti’s minimum wage, which is now less than $5. (In local currency it has decreased recently compared to the dollar due to inflation in Haiti). The park’s biggest employer is the Korean garment manufacturer Sae-A.

Much of the current popularity of low-wage garment work in Haiti can be traced to a 2009 report by Paul Collier, an Oxford economist and former director of the World Bank’s Development Research Group. In the report, Collier argued that the garment industry has the potential to create “several hundred thousand jobs” in Haiti.

One of the central critiques of the Collier approach is that low-wage garment manufacturing jobs will not actually provide long-lasting, well paying jobs.

As journalist Jonathan Katz argues in “The Big Truck That Went By,” low-wage garment manufacturing is a volatile industry that jumps from country to country, chasing the lowest wages.

“It wasn’t jobs that Haiti lacked,” he writes, reflecting on his time observing the country’s informal economy. “It was stable, sustainable incomes–something the garment plan would do little to provide.”

Regardless, the Collier report caught the eye of important policymakers, including Bill Clinton, and Caracol soon became a cornerstone of the U.S. approach to helping Haiti.

In 2013, USAID completed a power plant for Caracol that benefited residents in the surrounding area. According to the IDB’s latest annual report, the United States controls 30 percent of the voting shares in the IDB and donated $1.7 billion of the bank’s $5.3 billion 2014 budget. Finally, the U.S. Congress has supported the garment industry in Haiti through a series of tax exemptions for textiles sewn in Haiti.

U.S. policy also supported garment manufacturing during the Duvalier era, when backers of of the industry called Haiti the “Taiwan of the Caribbean.” At one point, the balls used in Major League Baseball games were all manufactured in Haiti. Nevertheless, political turmoil and the U.S. embargo of Haiti during the 1990s led to the collapse of the industry.

The survey of IDB projects was conducted by journalist George Altshuler in partnership with Gender Action using IDB project listings on the bank’s website. Gender Action is a member organization of the HAWG.