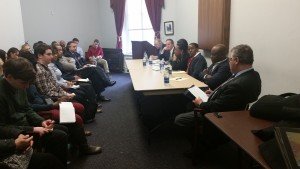 On Friday, March 4, 2016 representatives from the Organization of American States (OAS) and State Department joined two visiting Haitian human rights leaders and two U.S.-based academics in a discussion on Haiti’s current electoral crisis. Organized by the Haiti Advocacy Working Group (HAWG) and sponsored by Representative Yvette Clarke (D-NY), the discussion focused on the causes of the postponement of the electoral crisis, the selection of Provisional President Jocelerme Privert and efforts to move the electoral process forward.

The five panelists made opening remarks and then moderator, Dr. Robert Maguire of the Elliot School of International Affairs at George Washington University, directed an open discussion among the speakers.

The event in its entirety can be viewed below.