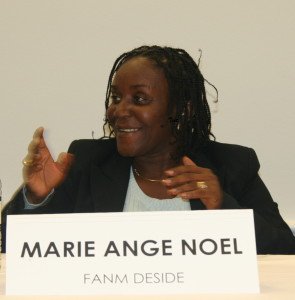 Haiti has a long history of patriarchy, discrimination against women and gender-based violence in the home, at work, in political life and in the courts.  Gender discrimination pervades Haiti systematically. This denies women and girls the power to prevent and address injustices against them.   HAWG’s Gender & Human Rights Subgroup envisages, advocates for and supports Haitian colleagues’ struggle for a Haiti where human rights, freedoms, gender equity and justice prevail in all areas of life.  To contribute to achieving these goals, the Subgroup holds the Haitian government, and bilateral and multilateral aid agencies accountable for harmful investment impacts on women, men, boys and girls.

HAWG’s gender subgroup addresses a range of issues that include the following non-prioritized list:

nder Impacts of Mining in Haiti be Prevented?

Over the past 10 years, American and Canadian companies have invested more than $30 million to explore for gold and other metals in Haiti.  In late 2012, the government issued three gold and copper mining exploitation permits.  Read More

Between February 22 and 26, 2017, four members of the Haiti Advocacy Working Group traveled to Haiti.   Elaine Zuckerman of Gender Action, Joel Kupferman of the Environmental Justice Initiative, Maurice Bloem of Church World Service, and Jayce Hafner of the Episcopal Church participated in this timely trip.  Tav Hafner served as the delegation’s videographer.   Read More

You are invited to attend a Haiti Advocacy Working Group panel on the status of women in Haiti featuring Haitian feminist activists and experts on Haiti.

Nadia Lafleur, Director of Fanm Deside’s battered women’s shelter who will describe gender-based violence in Haiti and the shelter’s work with female victims of violence

Sabine Lamour, Activist and Professor who will discuss women’s participation in Haitian elections, women’s political representation, and the “paradoxical status of women in Haiti’s reconstruction following the 2010 earthquake”

Amanda Klasing, Senior Researcher in the Women’s Rights Division at Human Rights Watch who will summarize Haiti’s 2016 submission to the Convention on the Elimination of Discrimination Against Women (CEDAW)

We welcome your participation! Read More

A group of human rights organizations sent a letter to the Independent Expert on the Situation of Human Rights in Haiti, Gustavo Gallon.

The letter summarizes the continued effect of the devastation caused by Hurricane Matthew and offers suggestions for effective assistance. Most of the information used in the report comes from direct input from communities impacted by the hurricane. Read More

Thirteen members of Congress sent a letter to Ban Ki-moon regarding concerns that it has taken too long for the UN to apologize to victims and set up a process that allows families to seek remedies.

Barbara Lee (D-CA) led the charge and has been a strong advocate on global health issues and aid transparency. Read More

Church World Service partner Aba System Restavek (ASR) organized a debate on Nov. 16 between children and the candidates for the Senate and Presidency.    The aim of the event was to encourage all candidates to sign up to a commitment to addressing children’s issues.   Unfortunately, none of the candidates turned up and the event was cancelled. Read More